We had our January Meeting on one of the stormiest days we’ve seen for a while.  Once we all dried out, we covered quite a bit of territory, as usual. Here’s a quick summary for those of you who couldn’t be there.

The Senior Center where we meet has informed us that they would like to raise our rental rate from $10/hour to $15/hour. For the four hour rental period we reserved each month, that means a bump from $40 to $60 per meeting.  This is actually a significant discount from the $25/hour they normally charge, but since our dues have only just been covering our expenses, we’ll be most likely be forced to raise our dues next season to (probably) $30/year.  Our Treasurer, Brian Hogan, reported that we have (with the addition of one more club member’s dues that came in during the meeting) a total of $531 in our bank account. We won’t run out of money any time soon, but we’d also like to keep at least a $400 balance in the account, and the higher rental rate will send us down below that threshold unless we increase our dues.

There was also some discussion of finding another location to hold our meetings. A few places were suggested that might (or might not) cost less than we’re paying now. There also might be possible meeting places that would be further north, which would be closer to where most of us live. The process of finding a new place is going to take some time, and we don’t really have to make the move in a hurry, but a plea was made to the members to spend a little time looking around for options.

Don Munsil brought a few things to show us this month. First he showed a Harry Potter 3D viewer and slide card set which was made by Viewmaster for Disney. The clever design of this viewer and the clever Viewmaster-like slides weren’t enough, so Stuart Turley (who formerly owned the set but traded it to Don for another even more obscure viewer) customized a second Harry Potter 3D view with achromatic lenses. These were shared with everyone during the break so we could make a side-by-side comparison of the identical viewers with different quality lenses.
Don also shared a set of German books with anaglyphic and traditional stereographic card images from Germany pre-WWII.

Our PSSCC stereo photo contest theme this month was “Action” and our winners were as follows (see the photos on our PSSCC Contests page):

Our competition to select images for the ISCC resulted in six images, with two images each from Shannon Milner, Bob Venezia and Stuart Turley. They’ll be submitted to the ISCC and we’ll announce their success as soon as we know.

Bob Venezia shared some spectacular photos he took on the island of Kauai, and Jim Johnston showed a series of images of amanita mushrooms growing on the wooded grounds of his church. Don shared a few short videos, as usual. We started the round with another incomprehensible sci-fi  demo reel from our favorite producers of Russian sci-fi demo reels, Animatrix. We followed that with a fireworks show from Japan by filmed by Takashi Sekitani,  (more at http://stereoeye.jp/index_e.html,)  some vertigo-inducing footage of Kawai shot from an ultralight aircraft, and a segment of the German TV series “Jewels of the World” about Interlochen, Switzerland.

Don showed a series of 100 late 19th century images of Russia and Finland captured from stereoscopic cards. Our final video “dessert” was a short film by 3D master John Hart called “The Fast Life” that mixed time-lapse photography, still photography and even some abstract-ish photos into a memorable art film.

It was a great meeting as usual and we look forward to our next meeting on February 8th.

Our December meeting was well attended and full of great photos and interesting info. For those of you who couldn’t make it, here’s a quick summary of what we covered.

Colleen Woolpert gave a presentation on a 3D viewer she’s developing. She wrote up some details which were posted earlier, including a photo of the viewer.

Sadly, the 2012-2013 ISC photo competition didn’t result in any ribbons for PSSCC. We came in 8th overall, which is respectable, but we’ve done better in the past. We’ll need to up our game this year.

Our recreational viewing  included some stunning photos of the Western Maryland Railroad by club member Stuart Turley, a set of 100 vintage stereoscopic cards of India circa 1902, and a couple of short films from the legendary John Hart. The first Hart film was extremely slow motion images of projectiles passing through lightbulbs, fruit and other small objects. The second was a psychedelic voyage through a variety of computer-generated fractal objects. We also enjoyed a film from the European Space Agency on the International Space Station. We also watched a segment of the IMAX film “Hubble 3D”  showing computer generated views of what it would be like to fly through space. 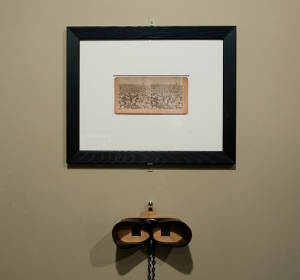 The TwinScope is a unique stereoscope for viewing stereographs or other side-by-side 3D prints (with combined maximum width of 8 inches). In designing the product, the aim was to replicate the viewing experience of the classic Holmes stereoscope, but in a museum-worthy hanging stereoscope for viewing stereographs that are not only hand-held, but also matted and framed, in exhibition cases, or otherwise displayed. Like the Holmes stereoscope, the TwinScope has a lens hood–in this case rubber, and large enough for eyeglass wearers–as well as prismatic lenses to give a clear, magnified view. A hanger incorporated into the wooden lens boards allows the TwinScope to hang on the wall or mount onto a pedestal. Focus is achieved by looking through the TwinScope and adjusting ones distance to the stereograph from 6-8 inches away. Additionally, when the TwinScope is turned upside-down, the hanger becomes a handle for hand-held viewing of loose stereographs (the handle will be lengthened thanks to feedback from a PSSCC member), offering a robust alternative to using fragile historic viewers.

TwinScopes were first used in an exhibition produced on the history of the stereograph for the Onondaga Historical Association earlier this year (http://colleenwoolpert.com/Sight-Unseen) and have been purchased locally by the University of Washington Special Collections, the Henry Art Gallery, the Bainbridge Island Historical Museum…and by one PSSCC member at the December club meeting! For more information, or to purchase a TwinScope ($150 at this writing), contact Colleen Woolpert directly at