David Brown gave a tutorial to the club on taking easy Cha-Cha pictures with a cellphone. 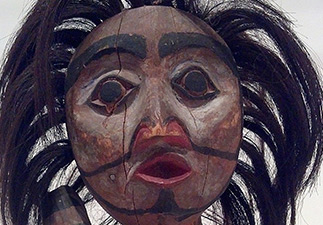 During a recent visit to the Seattle Art Museum I decided to try to make some macro cha-cha photos with my cellphone. It was fun to put them together and it was  a good learning experience. I’ll explain what I did here, and what didn’t work very well.

The cha-cha technique, briefly, is to take two successive photos with the same camera from different positions, then later assemble the images side-by-side into a proper stereo pair.

For this experiment, I set my cellphone camera to it’s macro setting, held the camera up flat to the museum exhibit glass (when no one was looking), took a photo, then slid the camera slightly to the right to take another photo. The closer the subject, the less I moved the camera. In most cases I slid the camera horizontally only about 1-2 inches. Some subjects were a little further away so I slid the camera slightly more. It wasn’t very scientific, but that was part of the fun. One or two have a slightly hyper-stereo look to them and I sort of like the result.

These images are in cross-eye mode.

I tried another technique that didn’t work well. That was to set the camera to the “multi-shot” setting so that it would take 5 shots in quick succession (within about one second) and while it was shooting, I slid the camera to the right. In theory, I’d be able to pair the first image with each of the subsequent images to get stronger and stronger stereo effects, and I would pick the best pair. In fact what happened was that I got one clear image (the first one) and four blurry ones. Shooting separate images gave much crisper results. Next time, I may just shoot 5 separate images with the camera held still each time, THEN try to assemble the best pair.

Another thing that didn’t work too well was shooting at some distance, particularly without the support of the glass case to keep the camera still. That’s when the noisy CCD in my camera and my unstable hand-held shots become particularly noticeable, as with the Pacific Northwest mask. The museum environment is kept intentionally dark, so it really helps to get close and be still.

And, by the way, shooting photos of art in the Seattle Art Museum is expressly allowed for most of the art objects in the museum.